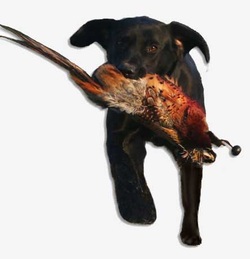 Field Trials are highly competitive working gundog competitions that are the highest aiming point for anyone undertaking training with their gundog. Field trials are run during the shooting season, in the earlier months on Grouse, and later from November to end of January on Pheasant, Partridge, Duck and other game. So they are basically an all round, and very considerable test of a working gundogs ability to be a talented and reliable shooting companion.

The standard of work that is expected in Field Trials is high. Dogs are expected to be able to sit throughout a Drive (In a ‘Driven’ Field Trial), or as the ‘line’ walks forward through a field with game flushing around them (at a ‘Walked Up’ Field Trial), off the lead, and remain steadily at their handlers side as game, both dead and wounded, falls around them, and also to be completely quiet with no noise from either the handler commanding his dog to ‘Stay’ or the dog, whining, barking or squeaking in any way. This can be very taxing for many dogs, including those who attend a shoot regularly, so specific training needs to take place on a simulated Field Trial training day, or similar before a handler considers his dog ready to attend one. Contacting a Field Trial Secretary and offering to help is always the very best way to view the requirements of a Field Trial without actually entering one, and help is always very welcome!

A Field Trial is competed in ‘rounds’. In reality they are knock out competitions, with dogs being ‘put out’ of the trial for poor work, noise, unsteadiness, or not finding game that a dog following them, does.


There are two sorts of Field Trials:

Walked Up. A line of dogs, judges and guns walk slowly, to heel, off lead, through a area of ground, with game, flushing as they move forwards, and being shot and dogs, in number order, being sent for that retrieve. The last round of a Walked Up Field Trial will often be a short drive, often a Duck drive near water, to test for noise and absolute steadiness.

Driven. Dogs will sit in one or more Drives, usually in line with the guns, and game is flushed over them, as on a shoot day, being shot around them. Dogs to remain steady throughout the drive unless specifically requested by a judge to retrieve a wounded bird during the drive. At the end of the drive, dogs will be walked away from the immediate game around them, and sent, by number, individually, on retrieves by the judges. They may often NOT be sent for the birds that directly fell around them but to other areas. Therefore the handler should have the confidence in his dog to remain steady in the drive, to be able to watch and mentally mark down as many birds as possible, even from the guns down the line.

Each dog remaining in the trial will have two retrieves in round one (which is called ‘the first round’). If they complete both of those nicely they will progress to round two where they will have one retrieve. There are usually four or five rounds in a field trial depending on how many dogs get ‘dropped’ for poor retrieving, gamefinding or unsteadiness. When the judges have seen enough to decide on the placings they will call and end to the trial. The judges decision is absolutely final and how MANY placings are given depends on the quality of work in the view of the judges. There could be dogs still ‘in’ the trial when it is called to a close but if the judges were not hugely impressed by their work they may not get a place awarded. So there is no ‘compulsion’ on the judges part to award first, second, third etc just because there were three or more dogs left in the trial. Often places are withheld, and occasionally if the quality of work was poor, no winner is awarded. Winning a place in any Field Trial is a huge achievement and never a ‘given’ just because you made it through to the end of the ‘day’.

- Novice Stakes -: Not to have won a Novice Field Trial.

- All Aged Stakes -: Open to all dogs of the specified breed but restricted by conditions laid down by the individual society. So often dogs not to have had a first place in a Open Field Trial.

- Open Stakes -: Open to all dogs of the specified breed or breeds the society represents.

Open Stakes are usually made up of dogs that have at LEAST won a Novice Stake, possibly also another Open Stake. They are the most demanding of Field Trials with the standard, generally, extremely high.

There are One Day, and Two day OPEN Field Trials run by various societies. A two day trial will have double the amount of runners allowed into it.

Novice and All Aged Stakes: Maximum of 16 Runners (More commonly between 12 and 14).

Obtaining a run in a field trial can be difficult, especially in areas without many trials runs. Someone wishing a run will send in a ‘Nomination Slip’ which advises the Secretary that they would like to go into the draw for a run in that trial. All the Nomination Slips are put into the ‘draw’ on the day of close of nominations. Sometimes there can be five times, six times, or even more ‘nominations’ than places available. So a list is made up of the order names were drawn and competitors are offered a ‘run’ in strict drawn number order until the card is filled. A reserve list is then worked down should anyone have to pull out right up to the day before the trial. Therefore, sometimes, you could be way down the reserve list, but STILL get a call to run at short notice, and Secretaries take a dim view if you THEN turn that run down without having notified them that you wished to withdrawn from the reserve list.

A Field Trial Champion (FT CH) is awarded to any dog who has won 1st place in Three One Day Open Stakes. Or won a One Day AND a Two Day Stake. Or finally, has won two Two day stakes. That dog will also need to have a Drive Certificate signed by a panel judge, indicating that at least one trial he sat steadily through a Drive (so you could not gain a FT CH title having only won purely walked up trials with no drive involved). Also equally a dog must have shown it will enter water during a drive, so a Water Certificate will need to be obtained at some point in his trialing career to show he has fulfilled this requirement. These certificates can be requested to be signed, by the panel judge, at any trial in the dogs preceding trialing career, so therefore do not need to be completed AFTER his title qualification, they can be ‘in hand’ ready.