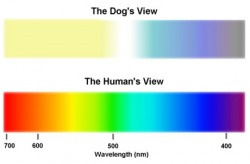 Like human eyes, canine eyes consist of cones and rods; however, there is an emphasis on their rods, while we have an emphasis on cones. Their emphasis allows them to see in the dark and dim light four times better than we can. The emphasis on human cones allows us to have a greater spectrum of colours in bright light.

We have three cones, while dogs have only two. Contrary to popular belief, dogs are not colour blind, but able to determine various shades of violet, indigo, and blue, and possibly red, so are in fact more ‘colour limited’ than ‘colour blind’.

In particular, dogs have difficulty distinguishing colours between green, yellow, orange and red. So whilst that bright orange dummy looks obvious to you, for your dog it’s the same colour as the green grass it’s laying on, and in fact the same colour as the green dummy in your game bag making it no less harder or easier to find than the traditional green canvas dummy!

It is thought that whilst dogs have difficulty in distinguishing between green, yellow, orange and red, they can actually distinguish between the colours in the indigo/blue spectrum very well. Thus there is a distinct difference for a dog between a dummy that is green, orange, red etc and one that is blue or indigo even.  Added to the fact that a blue dummy will also contrast well against green grass for a dog, then it makes sense if you wish to build confidence in your dog to use blue dummies. Also blue dummies are easier for us to spot in grass too, on the few occasions when we forget where we have placed them!

Likewise if you wish to make a retrieve that bit harder, then a green coloured dummy does the trick just as well as a yellow, orange or red dummy.